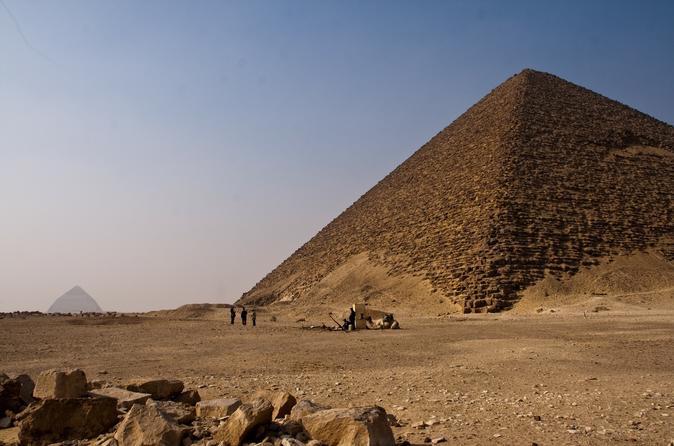 Full day tour to Giza Pyramids, the legendary Sphinx, the Valley Temple, Sakkara Step Pyramid and Complex also visit the magnificent Dahshur with its oldest Pyramids in the Egyptian history.

At 8.00 am your tour guide will pick you up from your hotel, to start your tour to Sakkara, the City of the dead with the famous step Pyramid of Djosser the world's oldest major stone structure. It was built in the 3rd Dynasty (around 2630 BC) for King Djoser.
Continue your tour to visit Dahshure where the first true pyramid was built by king Senefru the founder of the Fourth dynasty and you will visit the bent pyramid and the red pyramid. Lunch will be served at local Egyptian restaurant.
After that enjoy an excursion to The great Pyramids of Giza, you will star your tour there in the front of the pyramid of the king Cheops which is One of the seven wonders of the ancient world still remain awesome, then you see the pyramid of the king Chephren and the pyramid of the king Mykerinus. then from the best place at the Giza plateau you will see a panoramic view to all the three pyramids together. After that you will move to see the great Giza Sphinx which is lies At the foot of the Pyramids, the head of a pharaoh with a lion's body, which dates from the time of Chephren it was discovered in 1912. At the end of your tour you will be escorted back to your hotel.

Full day tour to Giza Pyramids, the legendary Sphinx, the Valley Temple, Sakkara Step Pyramid and Complex also visit the magnificent Dahshur with its oldest Pyramids in the Egyptian history.