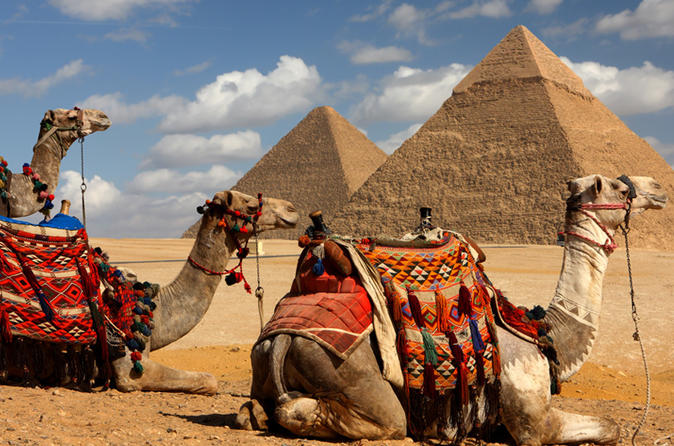 Have an incredible day tour in Cairo during Cairo layover. Visiting Giza pyramids, The Sphinx, The valley temple, The Egyptian Museum and khan el-khalili Bazaar and at the end you will be transferred back again to Cairo airport

Our tour guide will pick you up from Cairo airport, he will wait you outside the arrival hall holding a sign on his hand with your name to start your tour to the Egyptian Museum, where you can see a rare collection of 5000 years of art which is considered the largest most precious collection of Egyptian art in the world. Over 250,000 genuine artifacts are presented, including an exhibit dedicated to Tutankhamun collection of treasure, gold and jewelry which was enclosed in his tomb. Then to khan el-khalili Bazaar, you'll enjoy free time to stroll through the maze of streets and bargain for a souvenir of your trip to Egypt.
Continue your tour visiting The Pyramids of Giza, you will star your tour there in the front of the pyramid of the king Cheops which is One of the seven wonders of the ancient world still remain awesome, then you see the pyramid of the king Chephren and the pyramid of the king Mykerinus. then from the best place at the Giza plateau you will see a panoramic view to all the three pyramids together.
Then to the Valley Temple which belongs to the Pyramids of Chephren. This temple served definitely two functions: First, it was used for the purification of the mummy of the king before its burial. Second, it was used for making the Mummification process of the king.
After that you will move to see the great Giza Sphinx which is lies At the foot of the Pyramids, the head of a pharaoh with a lion's body, which dates from the time of Chephren it was discovered in 1912. At the end of your tour you will be escorted back to Cairo airport.

Have an incredible day tour in Cairo during Cairo layover. Visiting Giza pyramids, The Sphinx, The valley temple, The Egyptian Museum and khan el-khalili Bazaar and at the end you will be transferred back again to Cairo airport