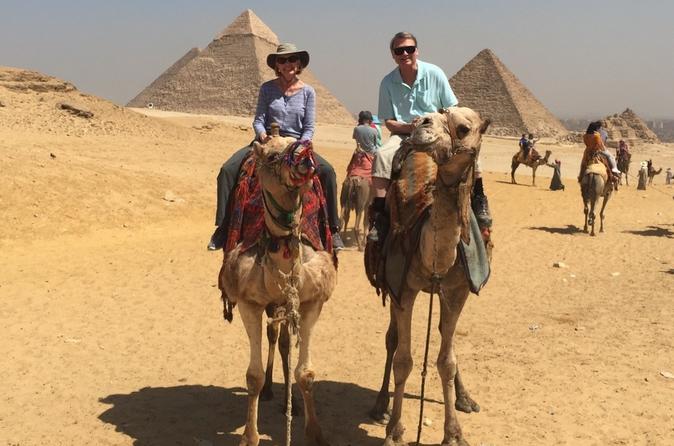 Private guided half day tour to the great Giza Pyramids of Cheops, Chephren and Mykerinus. Visit the legendary Sphinx and the Valley Temple. Included camel ride.

Our tour guide will pick you up from your hotel at 9.00 am, to start your tour to The Pyramids of Giza, you will star your tour there in the front of the pyramid of the king Cheops which is One of the seven wonders of the ancient world still remain awesome, then you see the pyramid of the king Chephren and the pyramid of the king Mykerinus. then from the best place at the Giza plateau you will see a panoramic view to all the three pyramids together and where you will start your camel ride.
Then to the Valley Temple which belongs to the Pyramids of Chephren. This temple served definitely two functions: First, it was used for the purification of the mummy of the king before its burial. Second, it was used for making the Mummification process of the king.
After that you will move to see the great Giza Sphinx which is lies At the foot of the Pyramids, the head of a pharaoh with a lion's body, which dates from the time of Chephren it was discovered in 1912. At the end of your tour you will be escorted back to your hotel.

Private guided half day tour to the great Giza Pyramids of Cheops, Chephren and Mykerinus. Visit the legendary Sphinx and the Valley Temple. Included camel ride.